I admit the title may look like the prequel of an epic movie trilogy. Or maybe it’s just because my mind reads it with a deep and dramatic voice.

All right, moving on.

I am beyond proud to collaborate with the Canadian Beverage Association during the month of March to bring light to the use of caffeine in sports nutrition. Because of course, a majority of Canadians drink coffee every day (about 2.7 cups on average), but some athletes also use caffeine to improve their performance.

First things first : what is caffeine?

1,3,7-trimethylpurine-2,6-dione, AKA caffeine, is an alcaloid from the methylxanthine class. It is a psychoactive substance with light diuretic effects.

In English now : caffeine is a naturally occurring molecule in the fruits, seeds and leaves of more than 60 plants. It acts in plants as a natural pesticide. Unlike insects that are paralyzed or killed upon ingesting caffeine, we humans are safe. The substance has a stimulating effect on us, decreasing sleepiness as well as improving reaction time and wakefulness. Some even use their morning coffee to strategically induce a bowel movement and kick the day off on the right foot (insert smiling poop emoji here 🙂).

To better appreciate the substance that gets our eyes open day after day, we must start at the very beginning.

Throughout history, many civilizations have described the heightened alertness and energy related to certain plants. Whether it is the tea leaf, cocoa bean, yerba mate, guarana berries or kola nuts, these plants were traditionally used as stimulants to treat ailments such as headaches as well as boost their energy and performance.

Although the tea infusion can be traced to around the year -3000 in China, the brewing of coffee beans to yield the dark liquid we have come to know and love is much more recent. In fact, the process started around the 1400s in Middle East before migrating to Europe in the 1600s and landing in America in the 1700s.

Fun fact : coffee is not the beverage from which caffeine was first used in sports nutrition. Its history is rather linked to carbonated water! Towards the 1700s, carbonated water was sold in pharmacies because it had, according to the beliefs at the time, health promoting properties.

Around the same time, inspired by the growing fascination for coffee in Europe, a German chemist named Friedlieb Ferdinand Runge successfully extracts caffeine from coffee. He affectionately names it « kaffebase » (coffee base).

Thus, all pieces of the puzzle came together during the 1800s when American pharmacists started adding medicinal herbs and flavor enhancers to their carbonated waters. One of these herbs was the cola nut, and the other, cocaine. 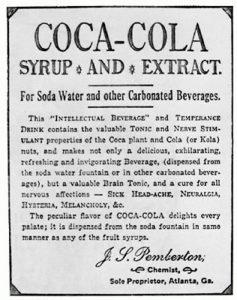 N.B. The soda in your fridge right now contains neither kola nor cocaine. The recipe was changed since then.

A shift to second gear

In reaction to the growing enthusiasm for colas, their marketing switched from a medicinal beverage to a trendy drink. To rev up the appeal of colas even further, corporations resorted to influencers of the times : sports celebrities.

Beginning to see a link with sports nutrition? I sure am!

In 1908, the American race driver Barney Oldfield endorsed Pepsi by appearing in newspaper ads, advocating for the « refreshing, invigorating » beverage, calling it « a fine bracer before a race, and a splendid restorer afterwards ». 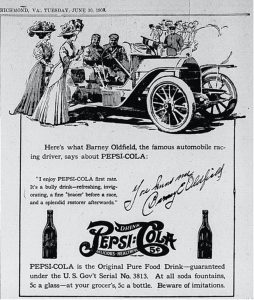 20 years later, the American Olympic team would travel towards the Amsterdam Games with 1000 cases of Coca-Cola. To this day, the brand still sponsors every summer and winter Olympic Games.

Science has joined the chat

At the beginning of the 1900s, sports drinks stepped up their game in an ambition to improve the performance of athletes, combining caffeine with cocaine and heroin in order to prevent exhaustion and hunger during long and taxing physical efforts. These homemade cocktails, developed secretly by the athlete or their team, were tolerated until heroin and cocaine became restricted to prescriptions in the 1920s and banned with the introduction of anti-doping rules by the International Olympic Committee in the late 1960s.

In parallel, the first studies concerning the effects of caffeine on muscle work were published in Cambridge UK in 1903 and 1908 by the researchers William Rivers and Harald Webber. Both of them performed the test of themselves, as was common at the time.

In the 1940s, American and Danish researchers picked up the findings of Rivers and Webber and brought them further, investigating the effects of caffeine on different sports and comparing it to other stimulants such as alcohol and cocaine.

More modern studies started in the American exercise physiologist David Costill’s laboratory. In 1978, he and his team showed a striking improvement in the performance of cyclists when they consumed 330 mg of caffeine – the equivalent of 3.5 cups – before a time to exhaustion test at 80% VO2max (which is hard). The caffeinated participants lasted 30% longer than their placebo counterparts.

Meanwhile, the World Anti-Doping Agency (WADA) banned caffeine as an authorized substance for sports in 1984, to the great displeasure of athletic coffee lovers. The agency reviewed its decision and authorized caffeine again in 2004, allowing athletes to drink coffee and to experiment with its performance enhancing attributes.

In the end, those decades of research lead to breakthroughs that everybody can now benefit from, whether you’re a sports enthusiast or a full time athlete. In my next blog post, I will explain how caffeine is used to improve performance nowadays, and what protocols work best.

In the meantime, I have a feeling that you will experience tomorrow morning’s coffee differently!

This website uses cookies to improve your experience while you navigate through the website. Out of these, the cookies that are categorized as necessary are stored on your browser as they are essential for the working of basic functionalities of the website. We also use third-party cookies that help us analyze and understand how you use this website. These cookies will be stored in your browser only with your consent. You also have the option to opt-out of these cookies. But opting out of some of these cookies may affect your browsing experience.
Necessary Always Enabled

Any cookies that may not be particularly necessary for the website to function and is used specifically to collect user personal data via analytics, ads, other embedded contents are termed as non-necessary cookies. It is mandatory to procure user consent prior to running these cookies on your website.